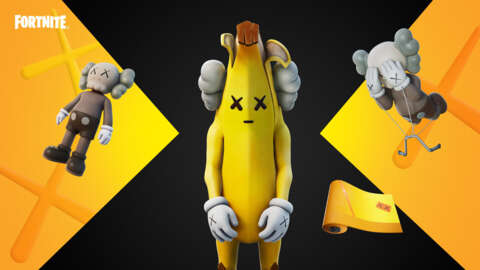 Epic is partnering with Kaws to create the Kawspeely outfit that’ll be available on July 2. Kaws is a New York-based artist who is known for his sculpture work on characters and themes. The new Fortnite skin will be another in-game variant of Peely, a well-beloved character.

The Kawspeely outfit will feature the following:

This is the second Kaws outfit, which previously came with other pieces like the Kaws Back Bling. Those pieces are returning but will now feature the option to change their colors such as the Grey Days style and Noir Nights, in addition to the original style.

The Kaws Skeleton Outfit will also return to the Fortnite item shop alongside Kawspeely. Kaws Skeleton comes in four colors which include:

Kaws will also have an island in Fortnite’s Creative mode that’ll be a recreation of the Kaws and Serpentine Hub that launched earlier this year at London’s Serpentine North Gallery. The hub will feature an art gallery full of Kaw’s work, including the “Kaws New Fiction” art exhibit. The exhibit will also feature paintings, sculptures, and augmented reality artworks developed with Acute Art by Kaws. Players can visit the Kaws and Serpentine Hub inputting the island code 9441-7852-6686.

For more Fortnite news, check out these stories: