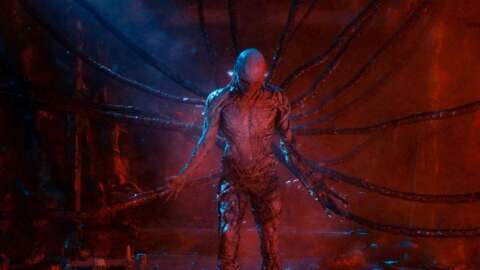 Netflix’s Stranger Things became an instant hit and pop culture phenomenon making stars out of its young cast as well as revitalizing Winona Rider’s career as Joyce, the mother figure of the group. Fan theories ran amock after the first season and now that we’re finally in Season 4, with the second part coming in July, it’s fun to look back at theories and see how wrong or right they were.

In this case, very right.

Pedestrian posted an interview the cast did with AOL back in 2016. The Stranger Things kids were asked what their favorite fan theory from the show was, even though this was just after the debut of the series, there were plenty of theories running around. When young Matarazzo had his turn, he mentioned his favorite one which now sounds really familiar.

“There’s this one in this video, and he was saying how other test subjects, besides Eleven, like, one through 10…most of them are dead,” Matarazzo said at the time. “But others were banished to the Upside Down. Like, they couldn’t get out.”

He continued by saying with them being in Upside Down for such a lengthy period of time, you can see how it had an effect on Will, but he wasn’t the only one. “It had an effect on them because they were in it for so long. They transformed into what was the monster. So, the monster was a recent test subject.”

If you’ve seen this season, then you know by now the monster Vecna is revealed to actually be One aka Henry Creele (played by Jamie Campbell-Bower), who had helped Eleven before he killed all the other subjects. Eventually, the two became enemies and with her powers, Eleven banished Creele to the Upside Down, who had a monstrous reaction to the dark dimension.

In Dungeons and Dragons lore, Vecna was the name of a powerful wizard who became a lich. He was eventually destroyed, and his left hand and left eye were the only parts of his body to survive, which have their own lore as cursed objects in the game.

Crystal Dynamics Is Testing The Waters For A New…